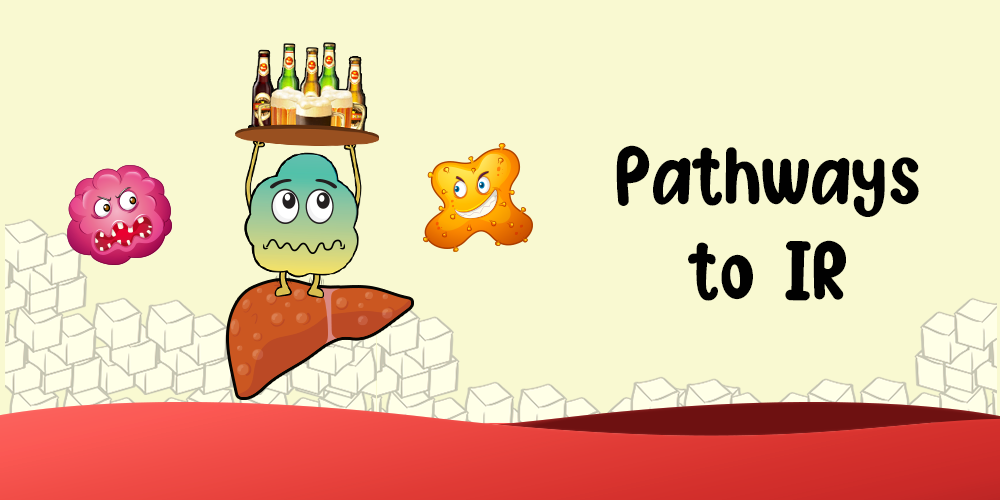 A balanced nutritious meal provides the body with the fuel to produce energy. The excess energy is stored in various parts of our body cells and organs for use during periods of fasting. The enzyme that regulates this process is insulin, a master hormone, released by the pancreas. However, due to repeated exposure to insulin, the cells in the body become resistant to it, which hampers the regulation process. This condition is called ‘Insulin Resistance’. Insulin resistance can lead to various chronic lifestyle diseases. In order to prevent these lifestyle diseases, it is important to understand the pathways that lead to insulin resistance.

Insulin is released in the body by the pancreas as a response to glucose levels in the blood. Insulin helps glucose enter the cells by opening their doors, where it generates energy. Our modern lifestyle relies heavily on carbohydrate-based foods like bread, pasta, rice, etc. that generates a lot of glucose in the blood. As a response, a high amount of insulin is also generated to push the extra glucose into the cells. As carbohydrate-rich food consumption continues, more insulin gets released that force-feeds the cell with more glucose. Eventually, cells start to resist insulin’s call leading to insulin resistance. This results in glucose staying outside the cells in the bloodstream. The pancreas responds to this by producing more insulin, which creates a vicious cycle of more insulin leading to more insulin resistance and vice versa.

For this task, insulin first goes to the cells to accommodate glucose for energy, but if the cells are full, insulin then goes to the liver. The liver stores a part of glucose as “glycogen” and remaining as “body fat”. This body fat is stored in the liver and in fat cells outside the liver.

When carbohydrate consumption increases, the amount of glucose turning to the liver for storage also increases. Insulin urges the liver to store more and more fat in the fat cells. Over time, the fat cells refuse to listen to insulin’s request of storing fats and start to break down into something called “Free Fatty Acids or FFAs” and harmful proteins called “pro-inflammatory cytokines or PICs”. Both these have the ability to obstruct the functions of insulin causing insulin resistance in the liver and fat cells. As the carb consumption increases, more FFAs and PICs are formed. Some of them also travel via the blood to the pancreas, brain, skeletal muscles and disturb glucose uptake in these cells leading to insulin resistance.

Fructose, similar to glucose, is a carbohydrate found in table sugar and many other processed foods like jams, high fructose corn syrup, packaged juices, drinks, etc. Even though fructose is similar to glucose, it does not increase insulin and hence is often ignored. But in reality, it is more potent in causing insulin resistance and high-fat deposition in the liver.

Once it reaches the liver, it is metabolized into glucose, glycogen and another simple carb called lactose. All these are stored in the liver and fat cells in the form of fats. Increasing fat deposits leads to obstruction in insulin function causing insulin resistance in the liver. As this resistance increases, the stored fats are broken down into FFAs and PICs that move to other places in the body and hamper insulin functions causing a further increase in insulin resistance.

Overconsumption of alcohol over a while obstructs the function of insulin in the liver. Once metabolized, it causes two major problems:

Alcohol follows a similar pathway as that of fructose. About 90-98% of alcohol is broken down in the liver and the remaining 2-10% is removed through urine or sweat. The liver produces an enzyme to break the alcohol into glucose (that is converted into fats in the liver) and further as carbon dioxide and water.

We know how our diet and habits play a key role in the development of insulin resistance, and it gets imperative for us to redesign our menu and act consciously to prevent its progression into serious lifestyle diseases.

To understand the various complications of insulin resistance signs to identify and remedy to reverse it, watch out for our next blogs in this series.

Disclaimer: The information provided in this blog, or any linked materials, are not intended & should not be construed as medical advice. Please consult a certified healthcare professional in case of a medical concern.